Not in the Cards

Sorry all. Still nothing fresh to post here.
I will be working on new stuff all day today, but I have a feeling it won't make it on here just yet. And in keeping with my resolution to update this blog more frequently here is something "recent" that I did.

This is something from this past December. It was intended to be the front of the company holiday card for GSN Digital. The project wasn't going to be mine initially, but due to work load I ended up being asked to do it. I wasn't given a lot of time to work on it, but I was still excited for the opportunity. 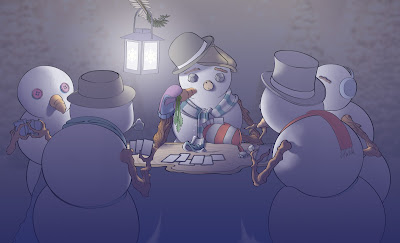 The empty space towards the bottom-center was left for the company logo.

Ultimately it never got used, as it was decided to go with an animated digital card using ready made creative instead. (womp womp)

Even though it never got to see the light of day, I still enjoyed working on it. At the very least it lives on here.

-Later
Posted by Bryan Walton at 7:01 AM